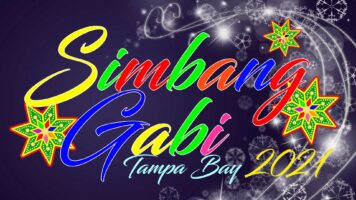 Everyone is invited as the Filipino community of Tampa Bay celebrates Simbang Gabi (Christmas Novena Mass) at Our Lady of Perpetual Help Catholic Church on Wednesday, December 15, 2021 at 7:00 PM. This will be the first of nine-day novena masses to be hosted by eight Catholic churches in the Tampa Bay Area and at the Philippine Cultural Enrichment Complex. The mass at OLPH will be celebrated by Rev. Fr. Jonathan Loverita from Corpus Christi Catholic Church.

“Simbang Gabi” is a devotional nine-day series of Masses practiced by Catholics and Aglipayans in the Philippines in anticipation of Christmas and to honor the Blessed Virgin Mary. The masses are held daily from December 16 to December 24 in the early mornings. On the last day of the Simbang Gabi, which is Christmas Eve, the service is instead called Misa de Gallo or “Rooster’s Mass”. The Simbang Gabi originated in the early days of Spanish rule over the Philippines as a practical compromise for farmers, who began work before sunrise to avoid the noonday heat out in the fields. Priests began to say Mass in the early mornings instead of the evening novenas more common in the rest of the Hispanic world. This cherished Christmas custom eventually became a distinct feature of Philippine culture and became a symbol of sharing.

Organized by the Sto. Nino Shrine USA, Inc. through Ed and Susan Bilbao, Simbang Gabi schedule is as follows:

Many thanks to Rev. Fr. Hector Cruz, SM for allowing this special celebration to be held, and to the Filipino-American congregation of OLPH who are helping through volunteerism, and food and monetary donations!

© 2022 Our Lady of Perpetual Help Catholic Church. All rights reserved.